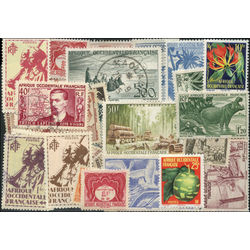 French West Africa is made up of French colonies in West Africa which were united as such in 1895. These colonies were: Mauritania, French Sudan, French Guinea, Senegal, Upper Volta, Ivory Coast, Niger and Dahomey. Many of the stamps issued were inscribed with the name of the colony and the AOF (Afrique Occidentale Française). The last stamp issued by French West Africa was in 1959.