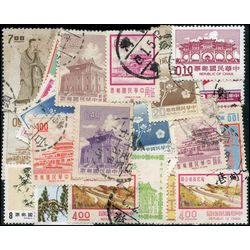 Formosa, also known as Taiwan (meaning beautiful island), is an island in East Asia off mainland China. Prior to the Second World War, Taiwan was under Japanese. At the end of the war, treaties gave Taiwan to the Republic of China. With the establishment later on of the communist People's Republic of China, political tensions were heightened. Today Taiwan (ROC) and the PRC practice a policy of mutual non-denial. In other words, both consider themselves as part of the same state, but Taiwan says that state is the ROC, whereas mainland China claims it is the PRC. Neither one accepts the other's status, but at the same time, neither denies the other's governing authority of their respective area of that state. Stamps of Formosa in this packet bear the inscription Republic of China and began being issued in 1949. This packet contains only commemorative stamps.