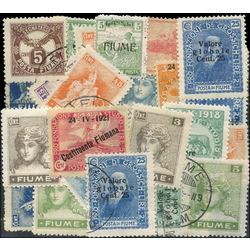 Fiume, now known as Rijeka, is a city and seaport in Croatia. While it was a part of the Austro-Hungarian Empire, the city was known as Fiume. Fiume was governed directly from Budapest and was a valuable possession as Hungary's only international port. It has passed through the hands of many nations since, and this has been reflected in its stamps. Often Fiume was simply overprinted on an occupying nations' stamps. Stamps began being produced in 1918.