HAPPY VALENTINE'S DAY!
CLICK HERE for a BIG DISCOUNT!
Use the coupon CUPID to save 10% on any order !
* Enter this code during checkout, valid through 2023/02/14.
FREE SHIPPING
available at $89
World Stamps & Collections /
World Stamp Packets /
Countries in F
Back 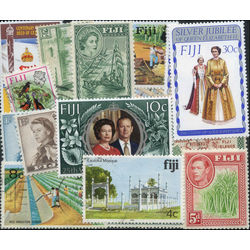 Fiji is a group of islands in the South Pacific Ocean. Fiji was a British colony beginning in 1874, but as far back as 1643 explorers had visited the area. Fijians were once known as a fierce cannibalistic people and the islands were even referred to as the Cannibal Islands. When we think of Fiji now, images of lush tropical settings and beautiful beaches come to mind, but Fiji has actually had a turbulent political history with a series of coup d'états occurring since it gained independence in 1970. Fijian stamps began being issued in 1870.