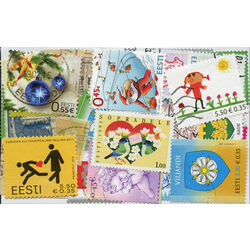 Estonia is a country in the Baltics near Finland, Latvia and Russia. Although once a part of the USSR, the Estonian people and their language more closely resemble the Finnish. The first Estonian stamps were issued in 1918. One of the most famous Estonian stamp issues is the "Flower Issue" of 1918. A trial printing of the stamps was made, and considered unsuccessful. The stamps were sold to a dealer and then lost. Genuine stamps from this issue are considered very rare. Despite difficulties during WWII and assimilation into the USSR, Estonia continues to maintain its postal service and does so to this day. Estland is the modern name for Estonia.