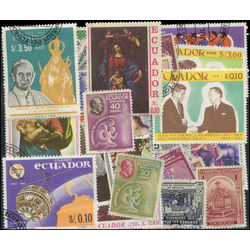 Ecuador is a country in South America which shares borders with Colombia and Peru, and has a coast on the Pacific Ocean. Along with the mainland, Ecuador also includes the Galapagos Islands, renown for the wide variety of different species of wildlife which inhabit the area. Early in its history, Ecuador became a part of the Incan Empire, and later became a Spanish colony. The postal history of Ecuador begins in 1865.