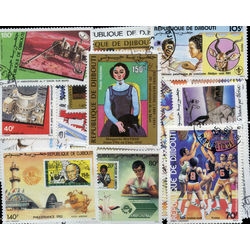 Djibouti is a country in Africa near Ethiopia and Eritrea. A Muslim country which used to be a French colony, Djibouti gained its independence in 1977. Unfortunately, Djibouti is a poor nation with many of its citizens living below the poverty line. Stamps have been issued in Djibouti both under the postal authority of France and as an independent republic.