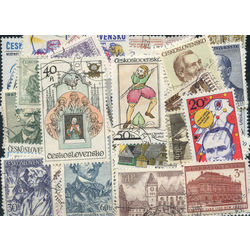 Czechoslovakia is a country in Central Europe which became an independent nation in 1918 when it declared the dissolution of its ties with the Austro-Hungarian Empire. It was occupied during WW2 by Nazi Germany; Czechoslovakia later split into the Czech Republic and Slovakia in 1993. Stamps of Czechoslovakia were issued from its independence, until the occupation, and then re-started after the war until 1992. The first president of Czechoslovakia raised the issue of printing its own stamps. Alphons Mucha was asked to design the first postal issue, which featured an illustration of Hradcany castle, the traditional seat of the Czech rulers.