HAPPY VALENTINE'S DAY!
CLICK HERE for a BIG DISCOUNT!
Use the coupon CUPID to save 10% on any order !
* Enter this code during checkout, valid through 2023/02/14.
FREE SHIPPING
available at $89
World Stamps & Collections /
World Stamp Packets /
Countries in C
Back 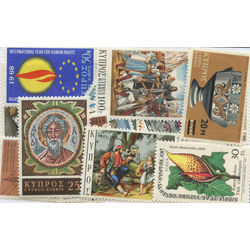 Cyprus is an island in the eastern Mediterranean near Turkey. Once a British colony, Cyprus gained independence in 1960 and became a member of the European Union on May 1st 2004. Stamps began appearing in 1864, but in with independence in 1960 Cyprus began issuing its own stamps. Many stamps have been issued illustrating the history, culture and natural beauty of Cyprus.