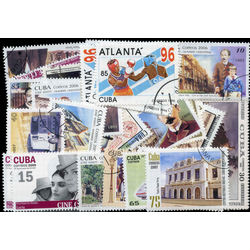 Cuba is an island nation in the Caribbean composed of the main island, Isla de la Juventud and several archipelagos. Cuba is known for its rich culture with Spanish and African influences, its political difficulties and its tourist resorts. Once it had a gross domestic product higher than Japan, and its workers had some of the highest wages in the world. Cuba no longer boasts economic prosperity since the takeover by Fidel Castro and the trade embargo imposed by the United States. Cuba and Puerto Rico issued stamps jointly from 1855-1872, then Cuba on its own as a Spanish colony from 1873-1899. Under the USA administration, it continued to issue its own stamps. In 1902 Cuba became an independent nation and has issued its own stamps down to this day.