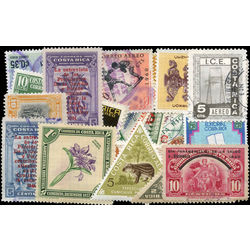 Costa Rica is a country is Central America on the Pacific coast bordered by Nicaragua and Panama. Its name in Spanish means Rich Coast. Discovered by Christopher Columbus in 1502, Costa Rica became a Spanish colony. Costa Rica is now an independent nation and considered a Republic. The stamp history of Costa Rica begins in 1863. The country is known as a prosperous and relatively peaceful nation compared to other Central American countries. The tourism industry flourishes partly because of the Costa Rica's rich ecological variety and the fact that it is considered by many to be one of the most ideal eco-tourism locations in the world. Cocos Island, off its coast, is a UNESCO World Heritage Site, and Jacques Cousteau proclaimed the island to be the most beautiful in the world.