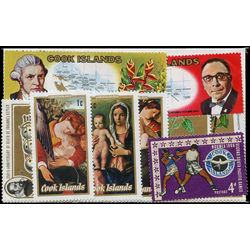 The Cook Islands are in the South Pacific Ocean near Fiji. They are composed of over 15 major islands and 6 atolls, all formed by volcanic activity. First inhabited by Polynesians, Captain James Cook landed there in 1773. The Cook Islands became a British Protectorate, but were transferred to New Zealand in 1901. In 1965 they became a self-governing territory in association with New Zealand. The first stamps of Cook Islands were issued in 1892.