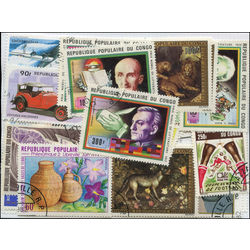 The Congo is a country in Central Africa near Gabon, Cameroon and the Central African Republic. The capital city is Brazzaville. Now known as the Popular Republic of Congo, it used to be a French colony but gained independence in 1960. It has a turbulent political history, a poor record of human rights and a population which lives below the poverty line. Stamps have long been issued under different regimes, but as a republic, Congo began issuing its stamps in 1959.