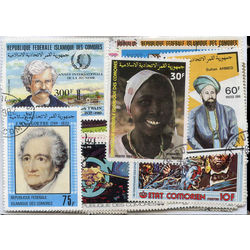 The Comoro Islands are an archipelago in the Indian Ocean near Madagascar. The four main Muslim islands form the Union of the Comoros, while the predominately Catholic island of Mayotte is considered a French overseas territory. Many different groups have populated these islands which used to be under the control of sultans. In 1841 the French gained control, and in 1975 a referendum was held which formed the country as it is known today. The postal system was joined to Madagascar's system from 1912 to 1975. After independence, stamps were issued inscribed État Comorien.