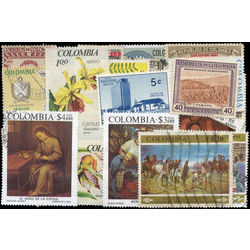 Colombia is a country in northwestern South America bordered by Brazil, Ecuador, Venezuela and Peru. It is officially a Spanish speaking country, but there are numerous indigenous tribes living there also. Spanish explorers began arriving in the late 15th century and eventually settled the area. Several rebel factions fought to free the country from Spanish rule over the years, and finally independence was achieved in 1819. Colombia is known as a major exporter of coffee beans and is home to seven UNESCO World Heritage Sites. Colombian stamps began being issued in 1859.