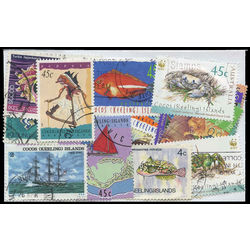 The Cocos Islands, also known as the Keeling Islands, are a territory of Australia composed of two atolls and 27 islands located in the Indian Ocean. The islands were discovered in 1609 by Captain Keeling and were under British control beginning in 1857. In 1955 they were transferred to Australia, and stamps were issued on the island under their authority. In 1994 the postal service authority was transferred to Australia Post and since then, stamps are valid in Australia and Cocos Islands. Since 1994, Cocos Islands stamps bear the inscription Cocos (Keeling) Islands Australia and often depict local fauna, flora and topics.