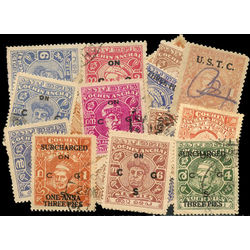 Cochin, once known as the Kingdom of Cochin, is now a state in southern India. Cochin as an empire was an important trading post for spices. It was settled by Portugal in 1503, but joined the Indian Union in 1947 when India assumed its independence. Later, in 1949, it joined with another state to become known as Travancore-Cochin. Then, in 1956, the area became the state of Kerala. Stamps of Cochin date from 1892-1949.