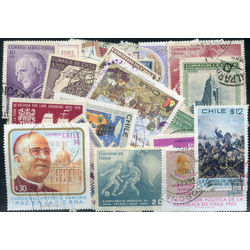 Chile is a thin ribbon of a country in South America between the Andes and the Pacific Ocean. It also has some overseas territories, most notably Easter Island. Chile was originally under Inca rule, and later the Spanish took over. In 1818 independence from Spain was declared. While Chile has had a rocky political history, for example during the Pinochet years, it is now considered stable and prosperous. Stamps from this packet depict Chile's history and culture.