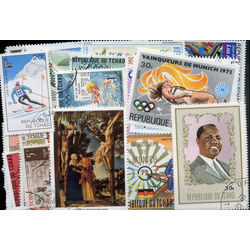 Chad is a landlocked nation in central Africa bordered by Libya, Sudan, CAR, and Niger. Its landscape is composed of arid desert and grassy savannahs. Chad was colonized by the French by 1920 and became a part of French Equatorial Africa. Chad gained independence in 1960. It is one of the poorest and most corrupt countries in the world, and it has known many political upheavals. Stamps from these packets were emitted under République du Thad.