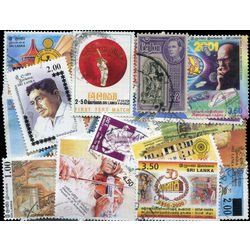 Ceylon, now known as Sri Lanka, is an island nation in southern Asia, off the coast of India. It is famous, obviously, for the export of Ceylon tea. The British Empire took control in 1815 and in that year organized a postal service. The first post office was established in 1882 in the capital city of Colombo. Ceylon became an independent Commonwealth in 1948, and in 1972 its name was officially changed to Sri Lanka. Stamps emitted under Ceylon therefore ended in that year. Stamps in these packets are from both the Ceylon days and modern Sri Lanka.