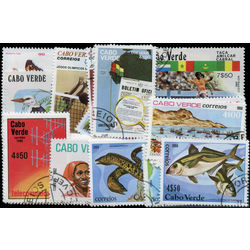 Cape Verde is a set of islands in the North Atlantic to the west of Senegal. This group of volcanic islands was first colonized by Portugal and named Cabo Verde. Cape Verde prospered during the slave trade because of its transatlantic location which made it a crossroads for slavers. This prosperity, however, disappeared eventually along with the slave trade. Cape Verde is now a democracy with an elected prime minister. The postal history of Cape Verde begins in 1877.