👑 Welcoming His Majesty King Charles III! 👑
CLICK HERE to SAVE with our COUPON!
Use coupon CharlesIII* to save 5% on any order!
*Enter this code during checkout, valid through 2022/09/30.
FREE SHIPPING
available at $89
World Stamps & Collections /
World Stamp Packets /
Countries in C
Back 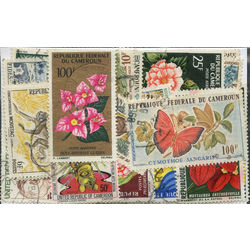 Cameroon is located in western Africa, bordered by Nigeria, Central African Republic, and the Republic of Congo. The country is called Africa in miniature for its geological and cultural diversity. Natural features include beaches, deserts, mountains, rainforests, and savannas. Despite most of its inhabitants being impoverished, Cameroon has a mainly stable government. Once a German colony, France and Great Britain respectively ruled two different parts of it. Finally, French and English Cameroon united in 1961 to become the Federal Republic of Cameroon. Since 1984, it has been known internationally as the Republic of Cameroon. Many of the stamps in this packet are from the Federal Republic days.