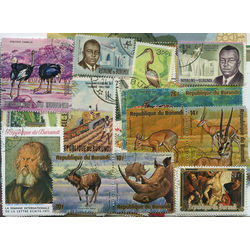 Burundi is country in eastern Africa near Rwanda. It is a landlocked nation populated by peoples of the Twa, Tutsi and Hutu tribes. Burundi is unfortunately well known for a civil war which resulted in the massacre of an unimaginable amount of people. Throughout its history, it has been plagued by civil unrest beginning at the time of its being a Belgian colony. On July 1st, 1962 Burundi began issuing its own postage stamps. While it was a colony, provisional stamps were issued.