HAPPY VALENTINE'S DAY!
CLICK HERE for a BIG DISCOUNT!
Use the coupon CUPID to save 10% on any order !
* Enter this code during checkout, valid through 2023/02/14.
FREE SHIPPING
available at $89
World Stamps & Collections /
World Stamp Packets /
Countries in B
Back 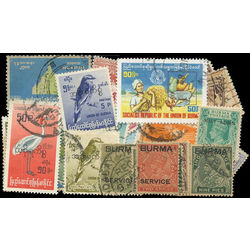 Burma is a nation in Southeast Asia now officially called the Union of Myanmar. It is nestled among other nations such as China, Laos, and India. While many religions are practiced in Burma, things can be difficult for citizens who are not Buddhist. Burma has had a turbulent history, from the Anglo-Burmese wars, to finally becoming a province of British India until its independence in 1948. Burmese stamp history begins in 1824 and was well organized under British rule for the next 120 years. Many are also interested in the stamps issued in Burma during WW2 under Japanese occupation.