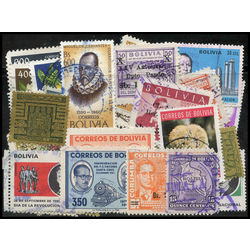 Bolivia is a landlocked nation in South America. It is well known for the high altitude of one of its major cities, La Paz. Bolivia's culture has been influenced by South America, as well as its native Indian population (the Quechua and Aymara). Many pre-Columbian ruins are found in its countryside. Bolivia's first postal issues began in 1867.