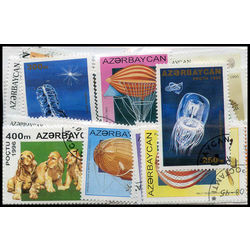 Azerbaijan is a nation in the Caucasus region of Europe. It shares borders with Russia, Georgia,Turkey and Iran. Part of the USSR, it declared its independence in 1991. It is a rocky and mountainous region with a coastline on the Caspian Sea. Prior to independence, Azerbaijan stamps were issued by the USSR, but it began to issue its own postal stamps as a sovereign nation in 1991.