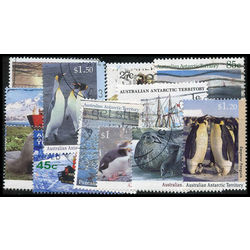 This is a large Antarctic territory claimed by Australia, the largest territory claimed by any nation in Antarctica. Most of the inhabitants who live there are working on research assignments and projects. This territory used Australian stamps for postage until 1957 when Australia began issuing Antarctic Territory inscribed stamps for the region. The stamps are valid for postage anywhere in the Commonwealth. They invariably feature Antarctica inspired design and themes.