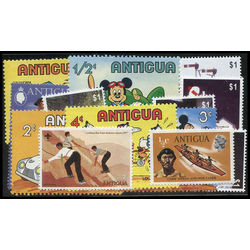 Antigua and Barbuda is an island nation located on the eastern boundary of the Caribbean Sea with the Atlantic Ocean. It is made up of two islands, Antigua and Barbuda and many smaller ones. It was colonized by a few nations in its time, starting with the Spanish when Christopher Columbus arrived in 1493. They were later replaced by the British and even the French settled it briefly in 1632. It is now an independent state in the Commonwealth of Nations. Today it relies heavily on tourism as a source of income, with many expensive resorts located on it. Antigua and Barbuda has issued a large number of stamps and souvenir sheets with many themes, and early stamps have a high value.