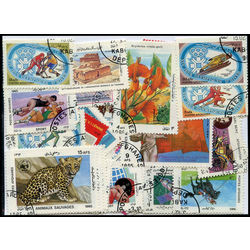 Afghanistan is a landlocked nation in Central Asia with its capital in Kabul. In 1860 a postal system was commenced by the leader of that time. The first stamps issued in 1871 were round, imperforate and with the design of a tiger's head on them. Round stamps ended in 1891 and rectangular issues began. A long history of different issues ensued with every new government. In 1928 Afghanistan joined the Universal Postal Union which made it no longer necessary to post international mail with British India stamps. The years 1989-2001 were marked by a hiatus in postal issues because of the civil war and the Taliban. The next stamp issued was in 2002 picturing a military hero who resisted the Taliban.