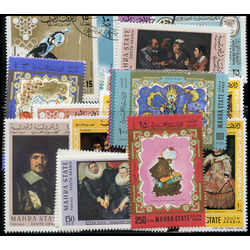 Aden is a city in Yemen, located in Southern Arabia. From 1838-1937 it was under British rule, becoming a colony in 1937. After many political changes, it gained its independence in 1970. Located on a sea route between Europe and India, Aden was a popular exchange port for mail. Mail service began in 1839 using stamps of British India, although a regular postmaster was not appointed until 1857. As a colony Aden had its own stamps inscribed "Aden". Since the port is central to its activities, Aden stamps often feature boats.