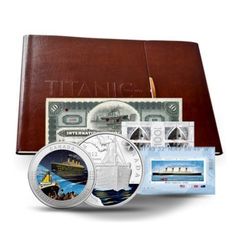 This set is limited to 10,000 worldwide. Very nice and would make a great gift.

Special features:
• This is an opportunity for you to own the sold out Mint’s commemorative coins: the R.M.S. Titanic - 50-Cent Silver-Plated Coloured Coin (2012)—available only in this Collector’s set—and the R.M.S. Titanic - 25-Cent Coloured Coin (2012), which bears two images of the fated ship.
• Titanic stamp pane bearing two unique cancels are available only in this Titanic Collector’s Set!
• You also receive an authentic White Star stock certificate, circa early 1900s in a protective mount.
• Your authentic stock certificate was issued by the International Mercantile Marine, the shipping trust that controlled the White Star Line, builders of the R.M.S. Titanic.
• Each certificate is uniquely numbered, with different values, and many were originally issued to "rich and famous" investors of the early 20th century.
• All five stamps from the Titanic’s 100th Anniversary issue.
• A special re-created Titanic cancel.
• Three Titanic postcards.
• Numbered certificate of authenticity included. Only 10,000 units produced worldwide.